I have to admit that the past few days I’ve felt stuck. As if I was knee deep in a bog and no matter how hard I tried, no matter how much I struggled, I just couldn’t move forward. You see I’m 20,000 words into writing the 8th book in the Kensy and Max series. It all started so well. I was flying. The characters were playing nicely and everyone was finding their way when all of a sudden things came to a grinding halt – I got stuck in the mud. It needed something, anything, lots of things  – except that I couldn’t work out what any of them were. It doesn’t matter how many stories you’ve written or books you’ve published, there are times that you will hit a brick wall. Things aren’t working – the plot’s too complicated – or maybe it’s not complicated enough. Perhaps a character you thought was going to behave in a certain way starts behaving completely differently. What do you do? What happens when you can’t see a pathway forward – when you’re blocked? How do you get out of that situation and keep going?

Well – I use a few different strategies. Talking about the story – asking ‘what if’? Reading aloud to myself and often to my husband or publisher, then more talking – thinking about dramatic ways to improve the plot – to cause a stir – then asking myself ‘what if’? another hundred times. 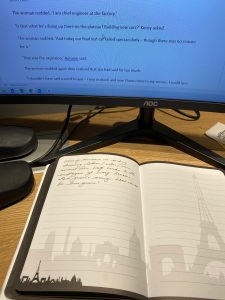 When you write books for children and young adults it’s really important that the children (or young adults) are front and centre. That they’re driving the action and advancing the plot. I felt this wasn’t the case for a few chapters and I wasn’t sure how to fix it because Kensy and Max are away on a family holiday and given that everyone in the family is a member of Pharos – the spy organisation headed up by their grandmother, I had to come up with a clever way for the children to need to conceal things from the grownups.

‘What if they receive a threatening message and revealing it could harm the entire family?’ Perhaps that could work.

‘What if a couple of the kids meet someone who has a secret and by sharing it they endanger not only the person with the secret but anyone else who knows it?’ Good idea.

‘What if the guy you thought was going to be a baddie actually has noble motivations but no one will listen to him?’ Excellent.

By asking and answering lots of questions (believe me, there were a load more than this), I’ve started to find my way out of the quagmire. I have other strategies too – vacuuming, going to the gym, long walks, talking to my cat Bally Puss. Sometimes it’s just a bit of distance from the story that helps the most. I hope that’s the case.

I’ve had a couple of days off writing as yesterday I flew to Queenstown in New Zealand – and it was a bit stressful. Our flight was fine – that wasn’t the stressful part. You see our cat, Bally Puss was enroute too. He left home on Monday and had to stay overnight in Sydney at the Jet Pets lounge then he flew to Auckland on Tuesday morning and had an overnight stay there where he had to pass all his vet checks and make sure that he was okay to enter the country. Today he flew to Queenstown and I am so relieved! He seems to have already settled in – he’s eaten and had a drink and my only worry is he hasn’t been to the litter tray yet but hopefully he’ll do the right thing there! I feel like I can breathe again. I was so worried for him – it must have been scary but honestly you wouldn’t know it. He’s given me so many head bumps I think he’s aiming for a concussion – for me! 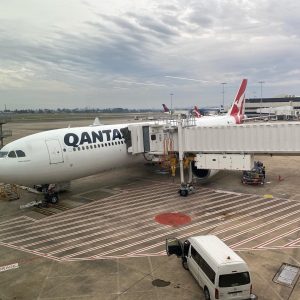 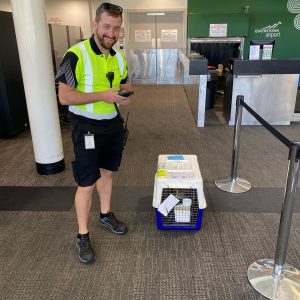 So tomorrow I will write and I will get this book back on track. 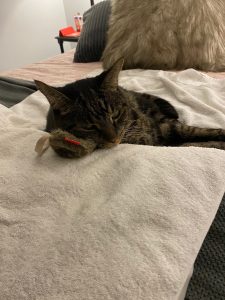 ‘What if someone sends an awful message to one of the main characters in the form of something truly disgusting – well at first glance it seems so, but then we realise it’s a fake (not telling what it is) but…what if?

Talk soon – and fingers crossed there will be a few thousand more words added to the manuscript next time we chat.