I am super excited to be joining you this month on the blog and as you may have read in James’s introduction, I will be writing from Queenstown on the south island of New Zealand (when I head over next Tuesday). My husband was there last week and just returned a couple of days ago. He tells me that it is getting quite cold and there is already some snow on the mountains. I’ll share some photos with you during my guest spot as the scenery is breathtaking – it’s one of those places that everywhere you turn is a postcard. Personally, I think that Queenstown is one of the most beautiful places on earth – my husband and I are fortunate to live there for part of each year when we’re not in Sydney. There’s a mountain range called The Remarkables – you only have to look at them (that’s them below) to see why someone chose that name. When my dad comes to visit he always trots out his best dad jokes – ‘Wow! Those mountains are remarkable.’ You get the idea. I spend a lot of time shaking my head. 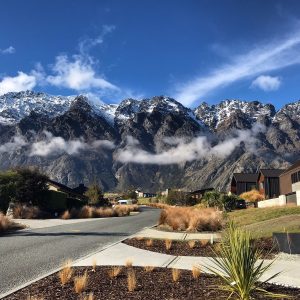 A little bit about me. I wasn’t born in New Zealand. I arrived into the world at Fairfield Hospital in Western Sydney (quite a long time ago now). I spent the first two years of my life living in a converted garage at the back of my grandparents’ house in Churchill Street Fairfield and then my parents built a new house in Ingleburn. My grandparents used to complain that it was ‘so far away, we’ll have to take a packed lunch.’ It’s really not but I think they liked having me forty metres from their back door (and I loved spending time with them too).

When I was nine and a half we moved to Camden – further to the southwest. It was wonderful growing up there. Camden was a lot smaller back then and everyone seemed to know everyone else. My favourite time of year was March when the show came to town. Some of my most thrilling memories were of conquering my fears on rides like the Octopus and the Pirate Ship, meeting up with my friends and being allowed to wander about and buy showbags. I think it was my first real taste of freedom.

Inside the AH and I Agricultural Hall they had the most wonderful displays of cakes, biscuits, paintings and craft, floral arrangements and sometimes animals too. There were lots of competitions on offer. My first thoughts of becoming a writer happened because I won a writing competition in Camden as a Year 9 student. I still remember the title of the very dramatic story, ‘Waiting – for my life’. It was set in a doctor’s surgery waiting room and the main character was about to receive some test results. It was scary and sad and something I was very proud of at the time – as it made me cry when I wrote it. Feeling emotion in stories is a big thing for me and something I’ll explore in more detail later on.

It’s interesting to think where that idea came from. I hadn’t ever been in that situation but yet I imagined myself there. That’s what writers do. Sometimes stories come from real life or a snippet of real life – for example, Alice-Miranda Shows the Way has a show in it – and I’m sure that I drew on my many memories of the annual Camden Show for that. Other times stories come completely from the writer’s imagination. We’ll talk more about that in some upcoming posts.

Anyway – I’m a full-time writer these days and have been for the past 8 years. Before that, I was a teacher for a long time – first in a small co-ed school in Mittagong south of Sydney and then I was the Deputy Head of a school for girls on Sydney’s upper North Shore. I loved being a teacher – inspired by one of my own who I will introduce you to another time. She’s had a huge influence on my life and career choices. Sometimes I think back to myself as a child and wonder how I ever got to where I am now – but dreams and goals have always played a huge part in my life. So my advice is to dare to dream big – you never know where you could end up.

I can’t wait to share lots of tips and tricks about writing – and some of my favourite books and stories with you over the coming month. So stay tuned and I look forward to meeting you.