Anton Chekhov shot a lot of people, but to be fair, he gave them plenty of warning.

OK, maybe not real people, and not in real life. Chekhov was a Russian playwright and short story author in the late 1800s, and he is famous for a particular piece of advice: “A gun placed on the wall in the first act must go off in the third.” (I’m paraphrasing here – he gave the advice several different ways to several different people.) 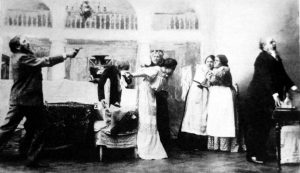 Chekhov’s Gun Principle is usually taken to mean that every element of your story should serve a purpose, and that you should keep your promises to the audience. If you hint that something dramatic is going to happen, then it should happen, otherwise the reader will feel ripped off. Imagine how annoyed you’d be if Q gave James Bond an exploding hat at the beginning of No Time To Die and it was never mentioned again.

Chekhov’s advice is good. But now let me introduce you to Jack’s Gun Principle: “A gun that goes off in the third act must be placed on the wall in the first.”

Same words, different order – and see how a completely different meaning emerges. You can’t just throw in a twist. You have to set it up. It has to make sense.

Many writers, particularly new writers, are terrified that readers will see their twists coming. So they hide the clues, burying them so deep that they’ll never be noticed. This means the twist, when it comes, is a surprise. Unfortunately it’s less “Wow!” and more “…What?”

Think about those readers who devour the same book over and over. They already know the turns of the plot, and yet they enjoy the story anyway. They’re not surprised, but they empathise with the character, who is. Here I’m paraphrasing sci-fi author Charlie Jane Anders, so let’s call this Anders’ Gun Principle: “A gun which goes off in the third act need only surprise the character, not the audience.”

As writers, we have a few obligations, which sometimes compete with one another:

Is there room to do all that and surprise the audience as well? I think there is. Let’s make a new rule. We’ll call it The WestWords Clubhouse’s Gun: “A gun placed on the wall in the first act needs to be there for a reason, but that reason need not be a gunshot.”

The reader needs to notice the clues, but they can be artfully arranged to point in the wrong direction. In my book, 10 Minutes of Danger, an Antarctic research station mysteriously vanishes. The hero speculates that it may have been teleported into another dimension when an experiment went awry. It turns out that’s not what happened – instead the ice melted, allowing the station to sink, then refroze over the top of it. But later, when several assassins emerge through a portal from another dimension, it doesn’t come completely out of the blue, because inter-dimensional travel has already been raised as a possibility.

Chekhov himself used this technique (obvious but misleading clues, not transdimensional assassinations). In his play Uncle Vanya, there’s a gun mounted on the wall in the first act. Its presence creates tension, filling the audience with dread. But no-one gets shot (at least not in the production I saw). Instead, at the end of act three, Vanya points the gun at Serebryakov, and yells, “Bang.”