When you tell people you’re a writer, the first thing people ask (after “Really?”) is this: “What genre do you write in?”

If you’re anything like me, you’ll find that a hard question to answer. Because you might be writing romance, but your story might also be funny. So, it’s a rom-com . . . except for that scary chunk in the middle. OK, so it’s a rom-com with a bit of horror . . . but it’s set in space, which I guess makes it a sci-fi? And the main character is investigating a murder, so . . . et cetera.

Don’t worry. This is actually a good sign. The best stories are hard to categorise. 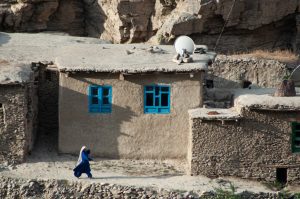 Here’s a challenge. Pick a genre – let’s say, fantasy. Try to come up with an idea for a fantasy story. I’ll try, too. Close your eyes, and take a minute to think about it. Don’t read on until you’ve done that. Go.

OK, are you back? You have your fantasy story? Let’s see if it sounds anything like mine:

An small elf goes on a long journey through dangerous lands, evading and sometimes befriending dangerous creatures, in order to find a magic gemstone which can save her village from the wrath of a giant.

Meh. It’s not bad, per se, but I’m not exactly excited about it. It feels derivative. Did it sound anything like yours? Let me know in the comments.

In the meantime, let’s try something different. Pick three genres – let’s say, military, romance, western. Now try to smoosh those together into a single story. Close your eyes. Go.

Are you back? Have you done it? Here’s mine.

A soldier is transferred to a peacekeeping mission at a village in Afghanistan, where she finds that a corrupt general has both his troops and the locals living in fear. Unable to report him without retribution, she decides to request a transfer out – but then she falls in love with an Afghani farmer, and suddenly leaving doesn’t seem like an option…

When you’re telling a story, you don’t actually need to know what kind of story it is. Later, you will need to decide what category it best fits into (especially if you want to sell it to somebody). But when you’re writing, you shouldn’t worry about that. The best stories, regardless of genre, have the same ingredients: they have suspense, surprises, excitement but also lulls, memorable characters, vivid settings. And an ending which ties everything together.

One warning, though. Readers may me comfortable mashing up elements from different genres, but there’s one area in which they’re surprisingly rigid: how far they’re willing to suspend they’re disbelief. Some people like impossible stories, others will only accept unlikely ones. Still others prefer probable stories, and some refuse to read anything which isn’t utterly true.

When writing your story, you may not need to worry much about this. But when editing it, it’s important to decide what level of reality you’re operating on.